We use necessary cookies to make our site work. We'd also like to set optional analytics cookies to help us improve it. Using this tool will set a cookie on your device to remember your preferences.

Necessary cookies enable core functionality such as security and accessibility. You may disable these by changing your browser settings, but this may affect how the website functions.

Signode is celebrating its 100th anniversary 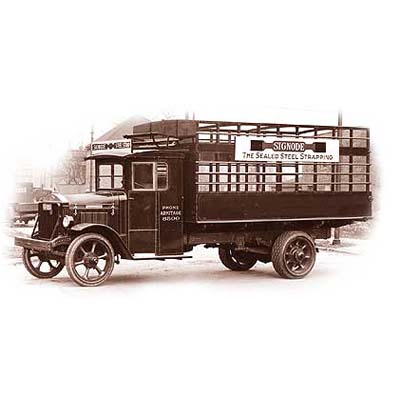 In 2013, Signode celebrates its 100 years of existence. The Seal and Fastener Company opened in Chicago in 1913 and invented a new technology that allowed distributors to tension and seal a steel strap around shipping containers without using nails. Three years later, the company was renamed Signode and became a well-known brand with continuous innovations in product development, industry technology and international growth to this day.

In 1923, Signode pushed for international exposure, beginning in the United Kingdom and Germany. Many product innovations followed such as the first fully automatic strapping machine in 1946, a plastic strap requiring 40% less raw material to manufacture, and the first battery-driven hand tools for plastic and steel strapping.

Today, with more than 100 years experience, Signode is a leading manufacturer of protective packaging systems.